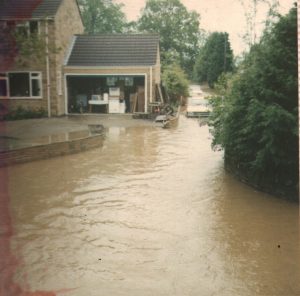 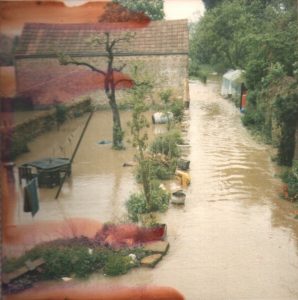 Particularly about the great flood of May 1979, which sounded like the biggest thing since Noah.

Thanks for all the memories and the photos. Pity there was no photo of the wheelbarrow that floated gently down Water Street outside the Ironmongers (now the Picture Gallery). Whose was it and what happened to it? Does anyone know?

The great thing about this flood is that we had the exact date (almost) because it was the Bath and West weekend where they had to tow parked cars out of the field with tractors. This probably put the flood on or around Thursday 31st May 1979. So I searched online and came up with a few details:

1 There is a flow gauge on the Parrett at Chiselborough. It measures the flow of water from its upper catchment area of about 30 square miles, only about 4% of the total flow down the river. It usually records about 42 cubic feet a second. On 30th May 1979 it recorded the highest ever flow rate of 6100 cubic feet/second. Thats about 150 times normal!

2 In May 1979 the Yeovilton weather station recorded the third wettest month ever with 171 mm (7 inches) for rain. The normal May fall is about 2 inches. I cant find on what days the rain fell but the records show that May 1979 was an odd month with quite a bit of snow the first week and a lot of rain at the end. It looks as though most of the 7 inches fell in the last week.

3 People told me that they had had quite a lot of continuous drizzle before the 30th and then one huge storm. This seems typical of floods here – a sharp storm falling on saturated ground.

4 The spring tide down at the Bridgewater end of the Parrett was on 26th May, just a few days earlier. This is important because it means that the sluice gates that stop the sea coming in (and the Parrett flowing out) will have been closed for longer than normal.

6 Everyone reported that the water came from upstream rather suddenly. Rumour said that a sluice gate may have been opened for safety reasons upstream but nobody knew exactly where. What was clear from the accounts was that the water not only ran through the front doors but went quickly round the back and flooded kitchens as well. Presumably there was so much water downstream in the Parrett by then that it backed up so there was nowhere for the Martock water to go.

7 Then, in the afternoon it suddenly went down. Low tide at Bridgewater everyone agreed. And of course it is a low spring tide which is lower than normal.

8 The Environment Agency recorded a major Levels flood in June 1979. presumably in the first week of June.

Thanks again to everyone who left their memories and stories and photographs. They were all very useful. In the next post I will try and summarise the lessons learned from these that can translate into possible Neighbourhood Plan Policies.