Water Street was flooded in both 1992 and 1993. Weather reports from these dates suggest that floods happen in Martock more frequently than the occurrence of major national weather events and that the causes are not always the same. 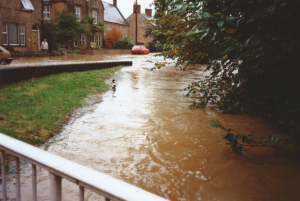 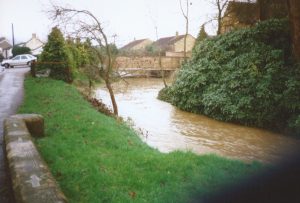 These two photographs show Water Street in October 1993 and in December 1992.

These floods occurred on 12th December 1992 and 13th October 1993. As with the 1979 flood, both these floods coincided, to within two days, with a spring tide in the channel. Although spring tides are periods of both the highest and lowest tides, it is probably that the natural flow of the Parrett to the sea will have been impeded more than normal. In both cases also the wind would have been in the west and it is likely that low pressure over the Bristol Channel will have raised the sea level by possibly as much as a metre. All this slows the flow down the Parrett.

But here the similarity between the two floods ends

December 1992 was generally wet but the amount of rain falling at the time of the flood does not seem to have been particularly unusual although the heaviest rain was early in the month. But it fell on land already saturated by continuous rain at the end of November. This increases run-off from the hills but more importantly, stops flood water being absorbed in the valley along Stoke Road.

The flood in October 1993 seems to have had a rather different cause. This month countrywide generally experienced odd weather including the infamous tornados in the midlands. This flood followed a day after some exceptionally heavy storms in the middle of what was a generally dry month. It seems likely that it was a sudden flash flood; indeed, it seems that getting on for the monthly average rainfall for the whole month fell around 12th October; probably twice as much as experienced in the 1992 flood.

I cannot find out whether the Levels were significantly affected on these dates.